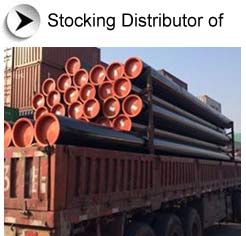 ASTM A672 Standard Specification for Electric-Fusion-Welded Steel Pipe for High Pressure Service at Moderate Temperature covers electrical-fusion-welded steel pipe for high-pressure service at moderate temperature. Heat treatment may or may not be required to attain the desired properties or to comply with applicable code requirements.

An analysis of each mill heat of plate material shall be made, also, an analysis of the finished deposited weld material from each 500 ft or fraction thereof shall be made. The mechanical test requirements includes one tension test specimen to represent each lot of finished pipe, and one transverse-guided-weld-bend test (two specimens) to represent each lot of finished pipe. Also, radiographic examination shall be made on the full length of each weld.

1.1 This specification covers steel pipe: electric-fusion-welded with filler metal added, fabricated from pressure-vessel quality plate of any of several analyses and strength levels and suitable for high-pressure service at moderate temperatures. Heat treatment may or may not be required to attain the desired properties or to comply with applicable code requirements. Supplementary requirements are provided for use when additional testing or examination is desired.

1.2 The specification nominally covers pipe 16 in. [400 mm] in outside diameter or larger with wall thicknesses up to 3 in. [75 mm], inclusive. Pipe having other dimensions may be furnished provided it complies with all other requirements of this specification.

1.3 Several grades and classes of pipe are provided.

1.3.2 Class designates the type of heat treatment performed during manufacture of the pipe, whether the weld is radiographically examined, and whether the pipe has been pressure tested. 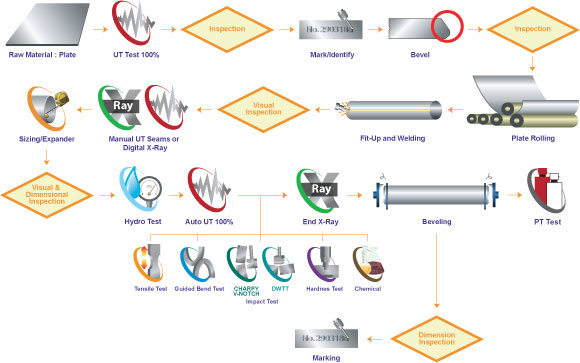 We supplied ASTM A672 Pipe to

ASTM A672 Steel Pipe Distributors in:-